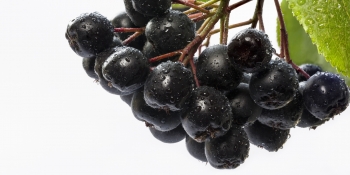 The chokeberry (Aronia melanocarpa) is a deciduous shrub native to eastern areas of North America, and is most commonly found in damp places such as wet woodlands and swamps. White flowers appear above dark green foliage in the spring, giving way to deep purple, almost black berries in late summer. The berries have a high tannin content, causing them to have an astringent, tart taste, hence the name chokeberry, but they sweeten just before ripening, and provide food for birds and deer. The plant has been described as an “eco-plant”, and has been used in habitat preservation, and reclamation of wetlands. It has also been shown to have exceptional resistance to industrial and traffic pollution, has high pest resistance, and can be cultivated with a minimal use of pesticides.

It was introduced to Russia in the late 19th Century, and by the 1940s, it was grown as a commercial crop there, and other central and eastern European countries, where it is harvested between late August and early October. The plant has been widely studied for some years in Eastern Europe, in state-funded research programs that seek to improve public health through the use of natural products.

In common with many other dark blue and purple fruits, chokeberries are high in a category of polyphenol antioxidants known as anthocyanin flavonoids. However, it is the exceptionally high concentration of anthocyanins present that has attracted attention. These pigments display powerful anti-inflammatory and cell-protective properties, and the combination of polyphenols has been shown to have antiviral and antibacterial properties. Extracts of the berries also slow the formation of arterial plaques, and decrease serum cholesterol levels. Studies have also demonstrated that chokeberry extracts decrease blood sugar levels in diabetic patients.

Chokeberry extracts have also shown activity against various forms of cancer. Preliminary studies demonstrated their effectiveness in slowing the growth of a particularly aggressive and difficult to treat brain cancer called glioblastoma.

Recently published research carried out at the University of Southampton studied the effects of chokeberry extracts on pancreatic cancer samples in vitro. It was discovered that when the berry extract was used in combination with the anti-cancer drug gemcitabine, a greater number of cancer cells died than when the drug was used alone. Further tests showed that the berry extract had no effect on normal, non-cancerous, host cells, and the effects were attributed to anthocyanin flavonoids. It is too early to say whether or not chokeberry extract will be an important addition to treatment plans, but pancreatic cancer has a poor prognosis, with an average survival period of six months after diagnosis, and any possible new treatment is welcome news, but more research is needed.